I’m supposed to blog when something interesting happens to me, right?

This morning as I was passing through Shinjuku Station, I saw a woman take a dive down a short flight of slippery stairs and lie crumpled on the wet ground with a quickly expanding pool of blood under her head. (That freaked me out.) I’ve lived here long enough to know that you can’t assume someone else is going to help so I rushed down her, tore off my headphones (and my glasses–oops), grabbed a towel from someone who pulled one out, knelt down and held the towel to her head while resting her neck on my thigh.

END_OF_DOCUMENT_TOKEN_TO_BE_REPLACED 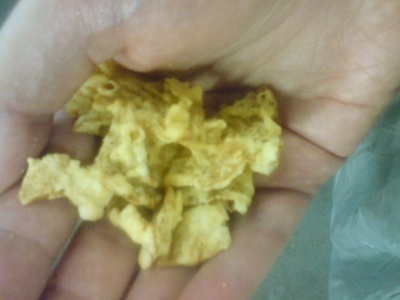 It’s Friday, I’m starting on my way home and I was hungry for a snack so I bought a bag of tempura fried squid. They look like potato chips or some other salted carbohydrate snack. Apparently, if you’re not eating them, they don’t smell so nice. I was eating them out of the bag when I got on the train and instantly all the women around me covered their faces with their handkerchiefs. One woman moved to another part of the train. I took the hint and twisted the bag shut until I got off at my stop then ate the rest in the open air.

Next time, I’ll wait to get home to eat them. Tony likes stinky food so we’ll eat them together.

Don’t know how it got there, but it sure livened things up yesterday.

As is already possible for other major cities around the world, you can now use Google Maps to virtually drive around Tokyo and enjoy 360 degree views of the cityscape. Here’s Shibuya Crossing. 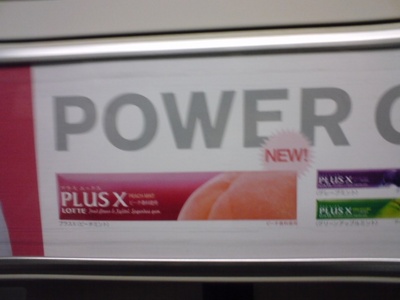 As of yesterday evening, the omnipresent police have completely disappeared, put back into cryogenic storage, ground up into tasty hamburger meat or maybe they were never police to begin with, and they’ve been given back their tattered homeless rags.

It’s a good thing too. By the last day they were all looking pretty bored. I started to see them congregated into groups talking to each other instead of standing watch over commuter/terrorists.

Seriously, I really want to know where the hell they all went.

This is pretty old news by now, but I just found out about it. I don’t spend much time surfing websites about Japan. When I still lived in the US, I hardly ever followed local news either. I’ve always been a Time/Newsweek/US News & World Report kinda guy.

For years and years, the English language website for Mainichi News had a section called WaiWai. It translated salacious and bizarre articles from the dregs of Japanese tabloids into English. As far as I know, the authors of WaiWai never made anything up–they left that to the authors of the original articles about such nonsense like a restaurant where you could have sex with a pig then have it cooked for you.

A Japanese person could read the original articles in their original context and considering the source and content easily see through the bullshit, similar to how an American could tell that an article from the National Inquirer or Weekly World News about scientists planning to blow up the moon is most likely not true. But foreigners have a propensity to believe absolutely anything they read about Japan, up to and including the thousands upon thousands of used panty vending machines on every street corner here that don’t f**king exist.

Apparently it was the “You screw it we cook it” restaurant story that caught the attention of Japanese bloggers and 2channers back in May. They got fired up about WaiWai sullying the reputation of their beloved country overseas, and from there the mass media caught wind and ran with it.

As reported in Japan Probe, the Mainichi acted all shocked and stunned, as if they had no idea WaiWai even existed, closed down the site, apologized in Japanese and English, and even went so far as to punish the employees responsible for the column. The chief editor, an Australian named Ryann Connell, has become the outraged public’s whipping boy and is currently suspended for three months from his job and sequestered in his home with police protection after receiving a number of death threats, as reported in the Australian media.

Here’s my take on the whole situation. WaiWai should have been shut down years ago. Republishing tabloid articles under the Mainichi name lent credibility to the articles that were most likely complete fabrications. I used to visit the site a few times a year simply because the articles were painful to read, which is kind of fun in an intellectually masochistic kind of way. They painted a picture of Japan very different from the Japan I know from living here. A news outlet like the Mainichi shouldn’t be in the business of publishing stories in a column where a small percentage of them are true and the rest are tabloid trash without any kind of disclaimer attached to the unsourced articles. In the end, the company got what it deserved–a whole lot of bad publicity and a mass exodus of their advertising sponsors. 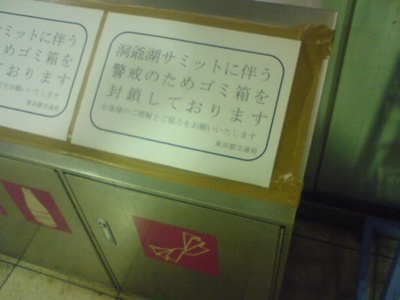 Twitter friends were right, the extra security is due to the G8 Summit in Hokkaido. It says so on these out-of-order garbage cans. Mystery solved.

I noticed a policeman posted at the exit of the Ginza line in the Aoyama-ichome station this morning who’s normally not there. He was watching people carefully and had his baton in his hand, in addition to the pistol strapped to his belt. Then when I passed by the garbage cans near the exit of the Oedo line, I noticed they were taped shut. To top it off, there was a policeman patrolling the street behind the Canadian Embassy, and he wasn’t there to ticket the illegally parked scooters. My guess is the extra security has to do with the over 300 death threats posted to the Internet since the killings in Akihabara a few weeks ago.

Want to know what scenario worries me the most? Some nutjob mixing together a batch of hydrogen sulfide on a crowded train or subway.

Update: Twitter friends say the extra security could be related to the G8 summits. That would explain the cop outside the Canadian Embassy.

Update #2: The illegally parked scooters got ticketed. He looked pretty bored wandering the neighborhood all day. I guess he needed something to do to pass the time.

A few months ago when I was posting random tidbits of stuff from the Japanese news media to this blog, I came across an article about a group suicide that happened in a hotel less than an hour from where I live. Three people–two men and a woman–packed into a bathroom, sealed the door with duct tape and mixed together some household chemicals to create hydrogen sulfide gas, which in high enough concentrations kills in less than 15 seconds. It was the first time I had heard of that method being used, and I thought it was interesting but too depressing to post. Also, I didn’t want to give anyone any ideas. It’s not too difficult to figure out that it’s simply a matter of finding something made with hydrochloric acid and something else containing sulfur, and mixing the two together in a bowl.

Weeks went by and I slacked off from reading news articles in Japanese, because frankly, it’s a time consuming pain in the ass, and keeping up with election news from the US in English requires far less effort in comparison. But eventually I did go back to it. (It’s what I do when I can’t sleep at night.) That’s when I discovered that suicide by hydrogen sulfide had become a fad. Between the beginning of this year and the end of May, there have been 517 deaths nationwide, compared to only 29 in all of last year. In at least one incident, the elderly parent of a suicide victim was found dead just outside the bathroom where the 39 year old man took his own life. In far more cases, entire neighborhoods have had to be evacuated until the air was deemed safe to breathe.

People who are suicidally depressed often feel like they just want to disappear; to go to sleep and never wake up. On various online bulletin boards (such as 2chan), blogs and websites, death by hydrogen sulfide has been toted as a way to take one’s own life quickly, easily, and painlessly. In fact, when you search Google for the term “hydrogen sulfide” in Japanese, the second highest ranking result after the Wikipedia article is a web page giving a step-by-step instructions on what chemicals to use, how to buy them, how much to mix together given the size of the room, and even a PDF sign to print out and tape to a door warning others to stay away and call authorities. Two links at the very bottom of the page take you to the sites for two suicide prevention organizations. I don’t know what the author’s point is, given the contents of the rest of the page.

But here’s what really blows me away: Even though for the past 10 years in Japan over 30,000 people have committed suicide annually, the government is doing very little to combat the problem. That statistic is four times the number of people who die in traffic accidents every year. On year’s total is roughly equal to the number of soldiers killed and wounded since the beginning of the Gulf War.

Nearly 20% of suicides are attributed to depression, the rest mostly to physical ailments or unsurmountable debts. It’s the ones caused by depression that are the most disturbing to me. If 6,060 people had died in 2007 from any other cause–homicide, SARS, AIDS, paper cuts–the news media would be in hysterics over the epidemic and the government would throw billions of yen at the problem. As it stands, the only concrete action I’ve been able to dig up on the part of the government is their declaration to cut the suicide rate by 20% by 2016. Maybe I just haven’t hit Google paydirt yet on what’s actually being done; the relevant section of the National Institute of Public Health’s website has a pretty picture of some flowers to show their concern, but the page hasn’t been updated since 2003.

I don’t know what my point is, other than 30,000 people out of a total population of 127 million is a hell of a lot of people, and the thought blows my mind. That, and I’d like to see cognitive behavioral therapy covered by national health insurance. Taking antidepressants without therapy is like taking anti-cholesterol medication but still eating at McDonald’s three times a day.